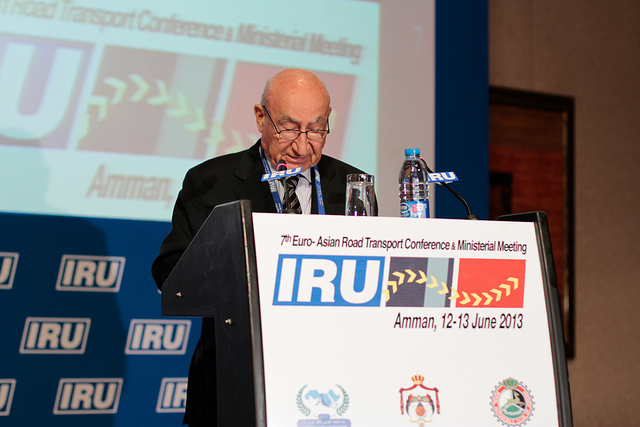 Road Transport: Driving Regional and Intercontinental Trade through the Middle East
Submitted by admin on Sun, 06/16/2013 - 04:03

Amman – The 7th  IRU Euro-Asian Road Transport Conference, Ministerial Meeting and Co-ordination Meeting of International Organisations and Financial Institutions, opened today in Amman, Jordan, attracting more than 400 business and political delegates from 44 countries, including 21 transport ministers and their representatives from the Middle East, Europe and Asia, and high-level representatives from international organisations and financial institutions, to debate the theme “Road Transport: Driving Regional and Intercontinental Trade” with a specific focus on the Arab world.

Opening the conference, IRU President, Janusz Lacny, said: ''despite the constantly changing political and economic environment, the road transport industry is more than ever prepared to meet the challenge and play its role in driving progress, prosperity and ultimately peace everywhere for everyone. But this will not be achieved without much concerted effort, and success will require governments to act in true public-private partnership to allow the road transport industry to effectively drive regional and intercontinental trade.”

A ministerial meeting was held in parallel to the conference, to discuss necessary measures required from governments in order to facilitate trade and international road transport, thus effectively boosting economies in the Arab world, while a coordination meeting between international organisations and financial institutions was also convened to foster and coordinate concerted action among these key actors in facilitating regional and intercontinental trade.

Conference participants also witnessed incredible stories of outstanding acts of courage and bravery, as the IRU gave tribute in awarding the IRU Grand Prix d’Honneur to unspoken heroes in the road transport industry.

The conference is organised in cooperation with the Ministry of Transport of Jordan and the Arab Union of Land Transport (AULT), and hosted by IRU’s Jordanian Member, the Royal Automobile Club of Jordan, under the high patronage of  His Majesty King Abdullah II Ibn Al Hussein.

Previous Pause Next
Back To News »
2022 Developed by Blue Ray for Web Solutions. All rights reserved
"All graphics and materials on this website copyrighted to The Royal Automobile Club of Jordan "